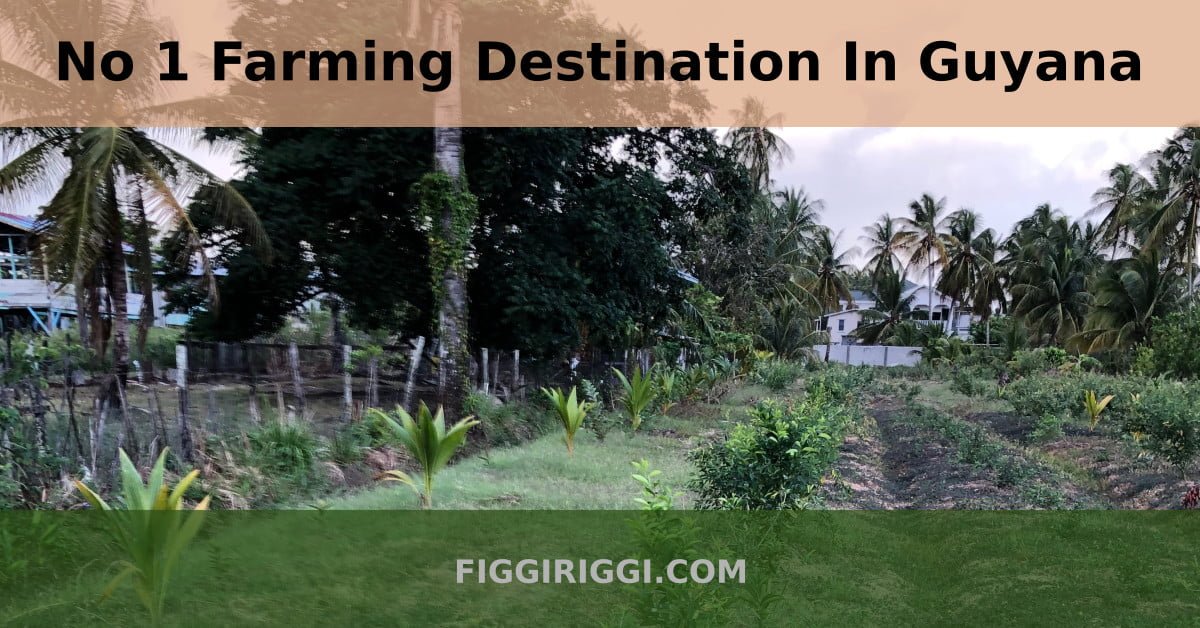 Some of the links in this article are "affiliate links", a link with a special tracking code. This means if you click on an affiliate link and purchase the item, we will receive an affiliate commission. The price of the item is the same whether it is an affiliate link or not. Regardless, we only recommend products or services we believe will add value to our readers. By using the affiliate links, you are helping support our Website, and we genuinely appreciate your support.

No. 1 Farming Destination In Guyana. Farming has been a curiosity since my childhood. I’ve loved growing plants in the garden and had enjoyed my granddaddy’s influence in South Alabama. I was always curious about his farming machines that he had in his shed. Some of which I never saw him use since we only came to visit during the month of August, so I never had a chance to watch him plant his vegetables and fig trees. Since childhood,  I had tractor toys and would watch farms pass by while riding in a car wondering about life on a farm.

Last month a tragedy occurred in my life where my fiancée’s mother passed away unexpectedly. After meeting her relatives and attending a local funeral, we set foot on a journey to her home country in Guyana to attend another funeral at St. Gabriel’s Anglican Church and the final burial ceremony at the cemetery resting at No. 28 Village. We stayed in D’Edwards Village, West Coast Berbice. I’ve created a map for you below for my curious readers who want to get an idea on where this is located. It doesn’t have an actual name on the map, so the closest I could find is next to Rosignol. There I met more relatives: several aunts, cousins, and uncles in a countryside community surrounded by farms and fresh produce. My mother in law was so influential that over 300 people attended the church in the states and nearly just as many in Guyana. May she rest in peace.♰

Speaking of farming, while staying at my fiancée’s uncle Rupert’s house there was a farm he owned behind the back yard. He showed us around and I had a chance to partake in some of the watering activities. The walk-through of the farm revealed his many trees, bushes and bean plants, planted in groves with a stream of water running down the center. The main water source was the Berbice River that connects to the Atlantic Ocean. The things he grows are coconuts, guava, plums, sour cherries, papayas, pomegranate, mango’s, beans, apples, lettuce and peppers. He showed off his water tanks that helped supply both well water pressure to his house and in cisterns at ground level used for watering his plants. I recently learned about the use of cisterns from my Master Gardener class and about the recommendation to collect rain water to water plants when the season is dry. I found some favorite foods on this trip. Guava juice, plum juice, sour cherry juice, and pine tarts.

Once the sad cemetery moments had come and gone, we found a day to explore the nearby Guyana Savannahs. Uncle Rupert, along with other uncles, owns property on those lands for growing crops and a cattle camp. Their horses roam freely during the day without fences protecting them. Keep in mind that the place is loaded with jaguars, two varieties of tigers, baboons, cranes, Harpy eagles, toucans, macaws, other tropical birds, and carrion crows. Although the birds aren’t a real threatening menace to the horses. At around lunch, they let the cows out to roam free in the pastures and then return to the safety of their pen at the end off the day. They live out in the open and not in a barn, except when there are calves, they place them in a shelter during the heavy rain seasons. Most of the cattle that we saw will be ready for the slaughter house in about 6 months, which yields a good profit While there, we saw chickens, chicks, and ducks. When the cattle leaves to have lunch in the pastures, the chickens take over and roam the penned in area for delicious beetles and other bugs that might be roaming the grounds, while being cautious around eagles and carrion crows. If you’re unfamiliar with the name, a carrion crow is like a type of vulture. Harpy Eagles will eat the chickens if they’re not careful.

Horses and a few cows

So far, my No. 1 Farming Destination In Guyana is in Berbice. All in all, this trip was educational for both a local burial ritual, local markets and farming. Next year, I plan to return for more of adventures and of the great fresh food that I ate. One such adventure that I look forward to is walking high up in the tree canopies of a nearby jungle in Suriname.

A word of caution

Don’t read the US Department of State website before you go. I did things that they warned about and I was fine. Maybe it’s because I was with relatives who knew everyone. I didn’t actually read the warnings until 2 weeks after the trip. Examples: Exchanging local currency on the street and walking down the street without being aware of the surroundings at night. The Dept of State also warned about violence of people running around with guns, knives and machetes robbing foreigners. I only saw very nice friendly people who welcomed visitors, including horses running down the streets at night going home without their owner tending to them.

FiggiRiggi.com is a participant in the Amazon Services LLC Associates Program, an affiliate advertising program designed to provide a means for us to earn fees by linking to Amazon.com and affiliated sites at no additional cost to you. These fees support the running of this website.